Beardsley Park – Approximately 30 to 40 individuals attended the function, hot dogs and hamburgers were cooked on the grill by Beardsley Park Neighborhood President Anthony Howell. Brochures were provided by the Neighborhood Services Department and Police badge stickers and firearm locks were given away by the Police Department. Back to school supplies were made available to all children who attended the event.  Games such as a Pinata and the Bozo the Clown bucket(s) game were provided for the children to participate in during the event.

Overall the event was a success and everyone in attendance seemed to really enjoy themselves and thanked the City of Champaign for sponsoring the event. 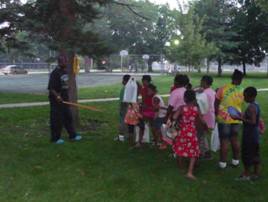 Bristol – Metanoia Centers and the Champaign County Township hosted a NNO event in Bristol Park.  The event was attended by approximately 50 people throughout the evening.  Hot dogs, hamburgers, and drinks were provided for those who attended.  Children were able to use the playground equipment in the park, while the young adults enjoyed music, socializing, and a round of musical chairs. Champaign Police Officer Ed Wachala attended with badge stickers and temporary tattoos for the children.  Andy Quarnstrom representing the Champaign County Township also attended the event. 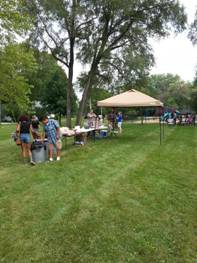 Draper and Healey – The Draper/Healey National Night Out event was held from 6 p.m. to 8 p.m. at the home of one of the members of the neighborhood watch group.  The event was also the 31st annual meeting for the Draper / Healey Neighborhood Watch group. The event was attended by approximately 30 residents.  There was a potluck meal with the chicken and hot dogs purchased through the National Night Out grant. After the dinner, there was a performance by local magician J.R. Thomas that was paid for out of the National Night Out grant.  City staff attending the event were Property Maintenance Inspector Tim Spear and Champaign Police Officer Ed Wachala. Garden Hills – Garden Hills Neighborhood held their National Night Out event at Garden Hills Park on Tuesday, August 5, 2014.  Community Development Specialist Susan Jones attended the event as well as representatives from Police and Fire.  The Fire Department provided a fire truck for children look at and investigate the inside.  Each child received a honorary fire helmet.  Police provided information on domestic violence, crime stoppers, and gun locks for those interested.  Antonial (Donte’) Lotts represented Access Initiative for youth, family and the community.  This organization works with schools, local businesses and the community to build a System of Care for youth who have been impacted by the juvenile justice system and/or dealing with social or behavioral challenges.  A bounce house was provided for children as well as free popcorn and slushies.

North 1st Street Association – The N First Street Neighborhood Association celebrated National Night Out with a garden party theme.  Approximately 50 people attended the event throughout the evening.  The youth who participate in the Prosperity Garden cooked vegetables from the garden using their own recipes, and a DJ provided musical entertainment.  Neighborhood Services Director Kevin Jackson, Champaign Police Officer Brandon Thomas, representatives from the Police Department and Neighborhood Services Advisory Board were in attendance. 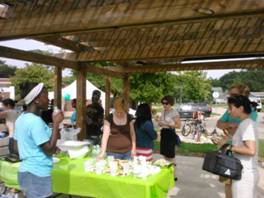 Town Center Apartments – 75 people attended the event with 98% of them being children. Town Center Apartment President Latricia Johnson arranged for self-defense class to be taught.  Children had the an opportunity to try to break the pinata with their karate kicks and punches.  Pizza was served and everyone seemed to enjoy themselves. Champaign City Council Member Karen Foster attended as well as Champaign Police Officer Brandon Thomas, Neighborhood Services Director Kevin Jackson and Neighborhood Coordinator John Ruffin.