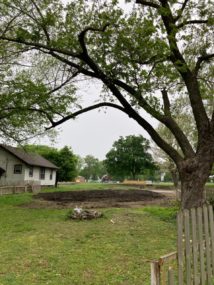 A fire damaged a house in late January beyond repair. A Property Maintenance Inspector issued a notice to the owner that the property was Condemned for Occupancy and needed to be demolished. The owner stated that he was getting bids for the demolition of the structures. Several weeks passed without activity at the property. The inspector reached out to the owner multiple times but did not receive a response. The case was forwarded to the Legal Department for further action. Due to the condition of the property, an expedited demolition case was filed by the Legal Department. The owner had thirty (30) days to take action, or the City could move forward to demolish the structure. After receiving this notice, the owner contacted the inspector to state that he had a contractor that would demolish the structure. On 5/18/2022, the demolition contractor had removed the structure from the property. Building Safety is following up with the contractor to make sure that the final inspection is passed.