The apartment building at 308 N. Prairie St. has been cited on several occasions over the past 30 years for a lack of a second means of egress.  The current case on this building is an Apartment Inspection case started in 2006.  However, the building was cited for lacking two means of egress in 1982.  The building is 4 stories tall and contains 27 units.  There are exterior doors on the 2nd, 3rd, and 4th floors that appeared to be only for ventilation as there does not appear that there ever was a fire escape or exterior stairway on the building.

Property Maintenance Inspector Tim Spear and Assistant City Attorney Laura Hall worked to get the property owner to install an approved second means of egress.  Building Safety Manager Larry Happ and Fire Marshal John Koller were also involved in bringing this case to a close.  A building permit was issued on July 5, 2012 to construct the second means of egress.  The contractor began work in November of 2012 and made steady progress until April of 2013.  There was a delay until February 2014 when the building plans were revised.  The contractor did not pass the final inspection on May 13, 2014 and work on the project stalled until Assistant City Attorney Laura Hall sent a letter to the contractor in September of 2014.  The contractor passed the final inspection that was completed on November 6, 2014. 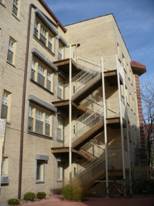