What is the Americans with Disabilities Act?

The Americans with Disabilities Act of 1990 (ADA) is a Federal civil rights law that prohibits discrimination against individuals with disabilities in all areas of public life, including jobs, schools, government services, transportation, and public and private places that are open to the general public.  The purpose of the law is to make sure that people with disabilities have the same rights and opportunities as everyone else. The ADA is divided into five titles (or sections) that relate to different areas of public life, including:

For more information about the Americans with Disabilities Act, please visit ADA.gov.

Notice Under the ADA

The City of Champaign’s 1992 ADA Compliance Plan outlines the City’s plans to comply with the provisions of the ADA of 1991 and also fulfills the requirement of developing a Transition Plan for removal of structural barriers in City buildings and facilities, including City parking lots and curb ramps. 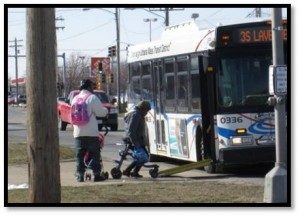 entities at the local (i.e. school district, municipal, city, county) and state levels, including public transportation. Under Title II of the ADA, “no otherwise qualified disabled individual shall, solely, by reason of such disability, be excluded from participation in, be denied the benefits of or be subjected to discrimination” in programs, activities, or services sponsored by the City. The City of Champaign has developed a procedure for filing complaints of alleged violations of Title II.

Learn More About Filing a Grievance Against the City

The City has appointed an ADA Coordinator to answer questions and provide assistance to the City’s residents and visitors on ADA-related matters: