The Information Technologies Department is proud to announce that Champaign Government Television (CGTV) recently won its 11th national award.  The most recent honor was announced October 2nd at the National Association of Telecommunications Officers and Advisors (NATOA) Annual Conference.  The Honorable Mention award was received in the Public Service Announcement (PSA) category of the Government Programming Awards.  The video was a responsible drinking PSA produced by City staff in which University of Illinois football players Wes Lunt, Mason Monheim, & Austin Teitsma discuss the responsibilities of hosting a party where alcohol is served.  That PSA was one of three which CGTV staff produced and released right before Unofficial 2014.  The video is available for viewing on the City’s website and YouTube channels.  Information Technologies Department staff shares this award with everyone involved, including the three athletes, Champaign Police Department, and University of Illinois. 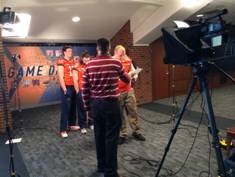